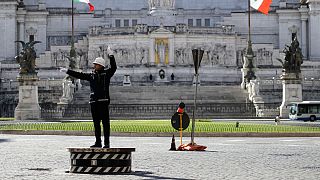 Officers are back directing traffic at Rome piazza

The show is about to begin in Rome's central Piazza Venezia.

A white-gloved traffic cop is slowly rising above the road on a round pedestal.

He elegantly waves around his arms and moves his fingers to beckon or halt cars, buses, and motorcycles coming at him from three directions in an "only-in-Rome" dance performance as he directs the traffic.

Rome's traffic police are back in Piazza Venezia, a square in the centre of Rome that is a hub for many Romans on their way around the city.

The traffic cops, an institution in Rome that have been around for decades, have been unable to work on the pedestal for the last year while the entire square was being repaved.

A historical figure for Romans, the "pizzardone", as the traffic officers are called because of the shape of their helmet, are popular with Romans.

The name "pizzardone" derives from the helmet's name, a "pizzarda", which itself recalls the shape of a bird's beak, a becco or pizzo.