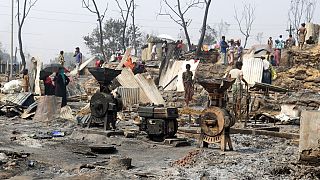 Fire at Rohingya camp in Bangladesh kills at least 15

At least 15 people have died and hundreds are injured and missing after a devastating fire destroyed thousands of shelters in a sprawling Rohingya refugee camp in southern Bangladesh, a UNHCR spokeswoman said.

At least 400 people were still missing and around 560 were injured by the fire, according to Louise Donovan, a spokesperson for the United Nations’ refugee agency.

In the aftermath, refugees picked through the burned debris looking for their belongings. Others wept.