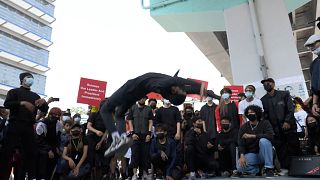 The rebel music is aimed at encouraging youths to go against the military after the state coup earlier in February. They perform on a street using violin, cello, trombone and percussion instruments.

Some youths also put on a coordinated dance routine while others showcase their individual moves. " We're just venting our boiling emotions and just let our compulsion take control while we're dancing," says a dancer.