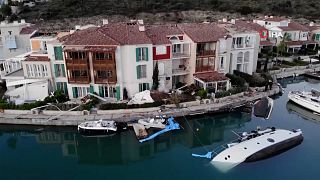 Small tornado leaves a path of destruction in Turkey

Overturned boats lie in the water in Turkey.

This was the aftermath of a small tornado in Cesme, some 90 kilometres west of the city of Izmir, on the country's Aegean coast.

It hit late on Thursday and uprooted trees, blew off roof tiles, swept up cars and knocked down a crane. At least four boats capsized.

The worst hit area was a construction site for summer villas where the crane was toppled.

Sixteen workers were hurt, including one who was hospitalised with a broken leg, the state-run Anadolu Agency reported.

Powerful winds and and hail also caused damage in the nearby town of Urla, destroying hundreds of commercial greenhouses.