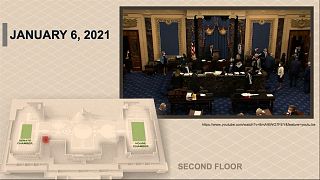 House Democrats are showing never before seen surveillance video of Donald Trump's supporters breaking the windows of the U.S. Capitol and running through the hallways in search of lawmakers and former Vice President Mike Pence. Some of the rioters grabbed fire extinguishers from the walls as they stormed through the hallways.