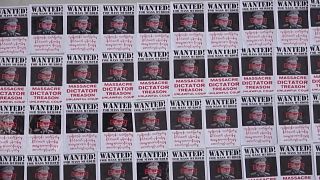 As they flood streets across the country in opposition to the recent military coup, a younger generation of Myanmar protesters are cracking jokes at the military's expense and winning fans on social media with their colourful, witty and often explicit signage.

Wednesday's protests in Yangon are a colourful display of creativity with inspiration from the "Milk Tea Alliance" – a pro-democracy movement spanning from Hong Kong to Taiwan and Thailand that Myanmar has now fully adopted.

The situation is so bad, "even the introverts are here", as one demonstrator's poster put it.

"My ex is bad, but Myanmar military is worse," said another.

"Our dreams are higher than MAL's height," read a handwritten cardboard sign -- a reference to the commander-in-chief's diminutive stature.

"Min Aung Hlaing I hate you more than my periods," said another held out a car window.

Photos of the relatable, sly remarks have been shared thousands of times on social media, with retweets and comments from users in Hong Kong, the United States and elsewhere.

"The younger generation... are on Facebook, TikTok, Instagram and Discord mobilizing other young people," she told AFP.

Unlike previous generations largely cut off from the world during the 49 years of military rule, these younger Myanmar protesters came of age plugged into the internet zeitgeist.

Many of the signs are in English, highlighting the desire to appeal to an international audience.