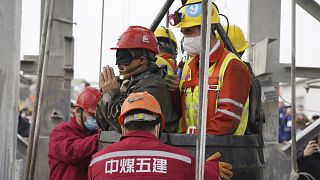 Eleven workers trapped for two weeks by an explosion inside a Chinese gold mine were brought safely to the surface on Sunday.

One worker was reported to have died from a head wound following the blast.

The fate of 10 others who were underground at the time is unknown.

Authorities have detained mine managers for delaying reporting the accident.