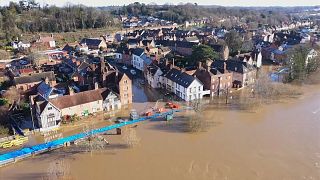 Residents of a town in the UK were reduced to tears on Saturday after a river burst its banks and flooded their homes - just a year after a similar disaster occurred.

The town of Bewdley, in Worcestershire, saw its flood defence barriers breached after heavy rain caused the River Severn to overflow, sending deep, muddy waters gushing into streets and homes.

In response, firefighters deployed boats to rescue those who were trapped by the flooding, according to British broadcaster Sky News.

One resident, Dan Madden, broke down in tears as he called upon Prime Minister Boris Johnson to install a permanent flood barrier, which could stop such an incident happening again.

The heavy rainfall came as a result of Storm Christoph, which swept across the UK this week, prompting the UK's Environment Agency to warn of "exceptionally high river levels".