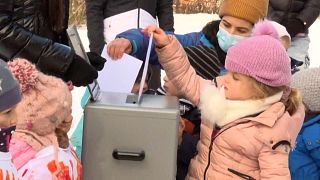 Swiss preschoolers cast their votes in a vote that will shape lives in the make-believe village where they call the shots.

It's part of a citizenship project in the city of Lausanne, which aims to get children accustomed to Switzerland's famed direct democracy and frequent referendums.

Once a week three- and four-year-olds from three preschools gather at the group's "village" in a wooded area on the outskirts of the city. Some of the children play roles like village chief, nurse or police officer, wearing homemade uniforms.