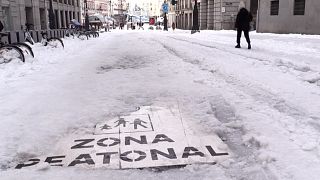 Madrid on Sunday began working to clear snow from an unprecedented blizzard carried by Storm Filomena, which hit the Spanish capital on Friday and Saturday.

The city's Adolfo Suárez Madrid-Barajas International Airport remained closed on Sunday, while train lines traversing the capital were shut down, and over 150 roads were unusable.

In the city centre, street cleaners worked to clear snow from busy pedestrian areas and footpaths.

The storm was described by Madrid's mayor as the worst in 80 years.

While the storm lost its strength as it moved eastward, Spanish authorities urged people to remain at home to limit the risk of falls on icy streets ahead of a severe drop in temperatures in the coming days.