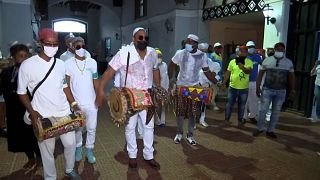 Afro-Cuban priests of the Santeria religion have said they forsee that 2021 will bring important changes to the island nation, as it undergoes major economic and social reforms in the midst of the coronavirus pandemic.

The priests compose a "Letter of the Year" early every January, in which they state their predictions for the coming year and designate the Yoruba spirits that will dominate that year.

This year's spirits are Olokun, the ruler of all bodies of water, and Oshun, queen of love and fertility.

The Santeria priests, known as Babalawos to Yoruba followers, warned on Saturday that infectious diseases will be on the rise along with contempt for authority.

They also warned of a rise in criminal activities including swindles, robberies and muggings.

The Babalawos predict an increase in natural disasters and higher death tolls due to illegal migration, and have called for a world order to analyze the high index of corruption around the world.

The Santeria scholars who interpret the spiritual messages and publish their predictions are part of the Cuban Yoruba Cultural Association, an organization with millions of followers on the island, which has a long tradition of Afro-Cuban religion, mixing African animist religious tradition with Catholic orthodoxy.