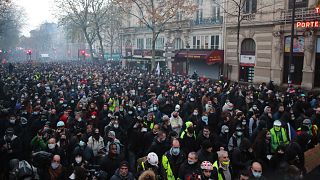 More than 100 arrested at tense security law protest in Paris

Scuffles erupted in the French capital on Saturday as riot police tried to disperse protesters demonstrating against a proposed security bill that could make it more difficult for witnesses to film police officers.

Paris police reported it took at least 107 people into custody at what quickly became a tense and sometimes ill-tempered protest, with officers wading into the crowds of several thousand to haul away suspected trouble-makers.

They hemmed in protesters, seeking to prevent the flare-up of violence that marked many previous demonstrations.

A police water cannon doused demonstrators at the end of the march, as night fell.

Demonstrators were protesting a contested article in new security legislation that would make it illegal to publish images of officers with the intent to cause them harm, drawing sharp criticism over fear it could hurt press freedoms and make it more difficult for citizens to decry police brutality.

The measure is being rewritten.

Police misconduct received new attention in France after footage posted on social media last month showed police officers beating up a Black man, triggering a nationwide outcry. Four officers were placed under investigation and two of them were jailed.