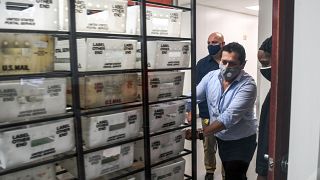 Trump triumphs in key US state of Ohio

Vote counting in the US state of Ohio, which has been declared as having been retained by Donald Trump and the Republicans.

Ohio was one of several states - which also included Texas and Iowa - on Tuesday where rival Joe Biden had made a strong late play but which were called for Trump.

But with more than 100 million Americans voting ahead of election day due to the COVID-19 pandemic, definitive results could take hours or even days in some states.