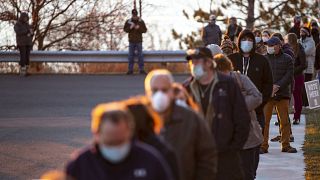 Millions head to polls in US despite record early voting

Donald Trump and Joe Biden handed their fate on Tuesday to voters, who will decide which man will steer the country through the surging coronavirus pandemic that has killed more than 231,000 people, destroyed jobs and reshaped nearly every aspect of American life.

With almost 102 million Americans voting early and millions more waiting in lines on election day, the rancorous campaign across a polarised nation clearly struck a nerve with the electorate.

Trump began the day on an upbeat note, predicting that he'd do even better than in 2016, but during a midday visit to his campaign headquarters, spoke in a gravelly, subdued tone.

“Winning is easy,” Trump told reporters. “Losing is never easy, not for me it’s not.”

Biden meanwhile kept his eyes on the critical state of Pennsylvania, taking his final pitch to voters in his hometown of Scranton and the Democratic stronghold of Philadelphia.

In battlegrounds, including Florida, Iowa, Georgia, Michigan and Pennsylvania, some voters showed up to their polling places before dawn to beat the crowds but still found themselves having to wait in long lines to cast their ballots.

The election day surge to the polls came even after 102 million Americans voted early, an eye-popping total that that represents 73% of the total turnout of the 2016 presidential election.