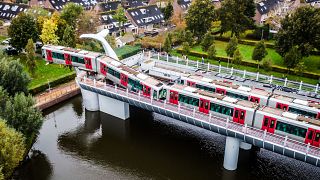 A sculpture of a whale's tail saved a driver from injury after his metro train crashed through stop barriers near the Dutch city of Rotterdam.

Images of the aftermath shows the front carriage suspended on the artwork, several metres above the water.

The driver was uninjured and there were no passengers on the train at the time of the accident, according to the metro operator.

It happened at the final stop on the metro line in the town of Spijkenisse, on the southern edge of Rotterdam.