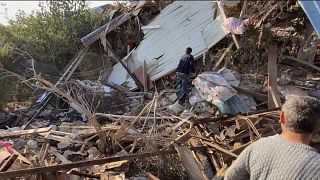 People in Martuni, Armenia have been given guns to defend their town as hostilities between Armenia and Azerbaijan continue.

The Ovanisyan brothers and their neighbours were summoned to a local recruitment office to receive rifles and join volunteer squads to defend Martuni. Many houses and buildings in Martuni have been hit by shelling in the flare-up of violence.

Both sides have exchanged accusations and claims over attacks, sometimes outside the conflict area.

In a sign that the conflict was widening, Azerbaijan's military said it destroyed an Armenian missile system.

Armenia's defence ministry responded by stating that it reserves the right to target Azerbaijani military objects and troop movements.

Russian President Vladimir Putin had a call with his Turkish counterpart Recep Tayyip Erdogan, emphasising the need to respect a Russia-brokered ceasefire that was immediately violated after it took effect on Saturday.