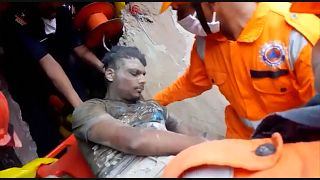 A residential building that was due for repairs collapsed in central India early Monday, killing at least 10 people and trapping many others, officials said.

Around 20-25 people are feared to be trapped under the rubble of the four-story building in Maharashtra state that collapsed at around 4 a.m., said India’s National Disaster Response Force.

According to local authorities, 150 people were in the property at the time of the incident and at least seven children were among the victims.

The incident comes just one month after another building collapsed in the state of Maharashtra, prompting city authorities to survey its structures.

He said that the building was over 30 years old and was due for repairs, which couldn't be carried out due to the coronavirus lockdown.

Maharashtra is one of India's hardest-hit states by the virus with over a million reported cases.

Building collapses are common in India during the June-September monsoon season when heavy rains weaken the foundations of structures that are poorly constructed or old.