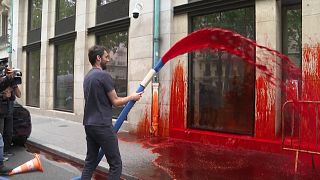 Delivering the message that they had "blood on their hands," activists from the climate action group Extinction Rebellion (XR) sprayed the Medef employers' association headquarters in Paris with "fake blood."

The staged protest was help to criticise the pressure exerted by employers and agro-industrial groups on the French government to lift environmental standards as part of the economic recovery from the COVID-19 crisis.

Crocodile, an Extinction Rebellion activist, said: "We poured blood on the facade because we wanted to denounce the cynicism of these lobbies but at the same time it's something dramatic.

It has to be said. Because they're only working for them, against us."