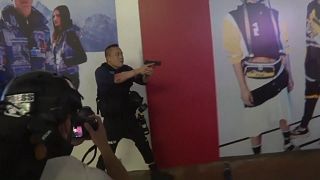 Riot police in Hong Kong used tear gas against protesters, some of whom threw Molotov cocktails and set barricades on fire, in the city's crowded Mong Kok area.

Clashes began amid an event where people commemorated a violent incident at the Prince Edward subway station in which riot police hit protesters in a subway car.

Police emerged from the nearby Mong Kok police station to clear the roads but confrontations continued for hours.

One police officer, separated from his colleagues, drew his pistol to ward off an angry crowd, that was pelting him with plastic bottles and other objects.

People gathered in the street nearby, and then small groups of protesters blocked the road, setting small fires.

Police removed flowers placed by the public at the station and guarded its entrance.