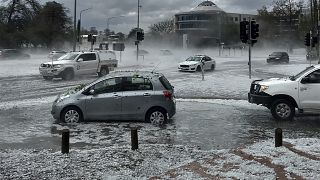 A powerful hail storm rained down on the Australian capital, Canberra.

Bad weather again brought chaos to parts of Australia, this time in the form of giant hailstones that pounded the capital Canberra and the country's second-biggest city Melbourne.

Wind gusts of 107 kilometres an hour were recorded in Dubbo as the dust storm descended over the town.