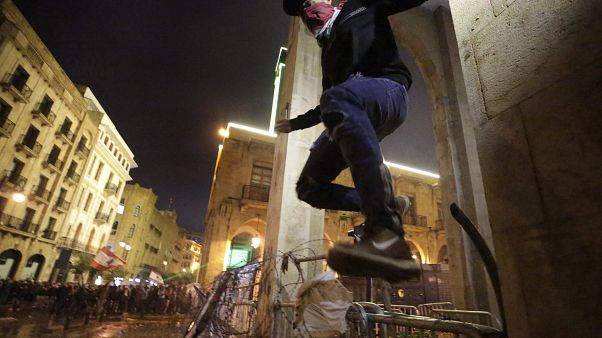 Thick clouds of white tear gas billowed in central Beirut as police pushed protesters out of a flashpoint road near parliament before the downpour largely cleared the streets.

Protests have rocked the country since October 17, with citizens from all religious backgrounds demanding the removal of a political class viewed as inept, corrupt and responsible for an ever-deepening economic crisis.

For the second night in a row, dozens of people lobbed stones at police from behind a metal barricade blocking a road to parliament, crying "revolution, revolution."

Anti-riot forces responded with water cannons, rubber bullets and then thick plumes of tear gas that pushed demonstrators back towards the main square.

The Red Cross said more than 145 people were injured, including 45 who needed treatment in hospital.

President Michel Aoun called for a "security meeting" with the interior and defence ministers to discuss the crisis, NNA reported.

But a 34-year-old protester called Mazen said he and others had lost hope in politicians.

"After three months of revolution, they have proven to us that they don't change, don't listen, and have nothing to give," he said.