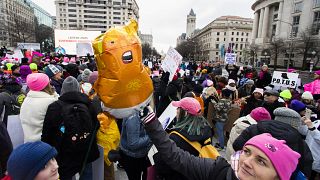 Thousands of women marched through Washington DC on Saturday at a women's march opposing US President Donald Trump.

Many protesters said they were horrified at the prospect of Trump winning the upcoming November presidential election.

A few thousand protesters gathered in Washington on Saturday, despite freezing temperatures.

Organisers praised the protesters for their "commitment, zeal, sass and tenacity" to fight on against Trump.

More than three million people gathered in the US to protest the US president after his inauguration in 2017.

In 2017, the day after Trump's inauguration, more than three million people gathered nationwide, but numbers have since declined each year.