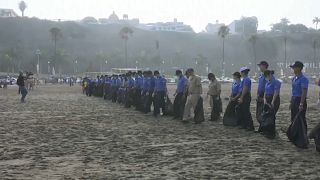 Peruvian officials on Monday collected tonnes of rubbish on a popular Lima beach in a campaign spanning three dozen beaches in the Pacific, the Amazon and Lake Titicaca.

Members of the Navy, municipal officials, police and fishermen collected waste on Agua Dulce beach, the most popular beach in Lima where thousands of people visit on weekends.

This is the second national campaign since it began in December.

Peru lacks a coordinated general system of national clean-ups and the responsibilities are instead spread across 4,385 municipalities in the country.

Most of these have poor waste collection services.

According to the most recent official figures, Peru produces 23,000 tonnes of garbage daily.

An undetermined amount ends up on the pacific coast beaches, rivers and lakes, including the Amazon River and the Titicaca Lake, that is shared between Peru and Bolivia.

A 2015 analysis by the International Coastal Cleanup organisation on Peru's beaches found that plastics accounted for nearly half of the waste, followed by wood and glass.