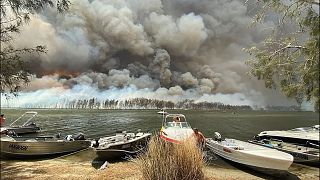 Authorities said 381 homes had been destroyed on New South Wales' coast this week. At least eight people have died this week in the state and neighbouring Victoria, Australia's two most-populous states, where more than 200 fires are currently burning.

Fires have also been burning in Western Australia, South Australia and Tasmania.

The early and devastating start to Australia’s summer wildfires has led authorities to rate this season the worst on record. About 5 million hectares (12.35 million acres) of land have burned, at least 17 people have been killed and more than 1,400 homes have been destroyed.