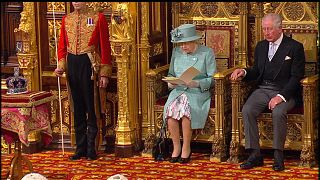 Queen Elizabeth II formally opened a new session of Britain's Parliament on Thursday, with a speech giving the first concrete details of what Prime Minister Boris Johnson plans to do with his commanding House of Commons majority.

An official known as Black Rod invites MPs to the House of Lords to attend Queen's speech at State Opening of Parliament. Before entering the Commons, Black Rod has the doors shut in their face, symbolising the chamber's independence from the monarchy.

During her speech, the Queen provides the government with an opportunity to highlight its priorities for the months ahead. It forms part of the State Opening of Parliament ceremony, which marks the start of the parliamentary year.

The Queen’s Speech - written by the government but read out by the monarch from atop a golden throne in the House of Lords - included several dozen bills that the government plans to pass in the coming year.

A central piece of legislation was Johnson’s Withdrawal Agreement Bill, the law needed to make Brexit a reality by January 31.

Thursday’s speech also included a bill to overhaul Britain's immigration system after Brexit, when EU citizens will lose the automatic right to live and work in the U.K.

Beyond Brexit, there was a law committing the government to spend more on the National Health Service, which has struggled to keep up with growing demand during a decade-long funding squeeze by previous Conservative governments.