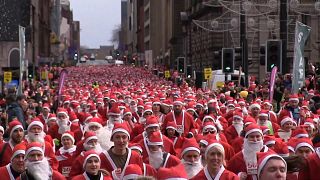 The streets of Glasgow's city centre were painted red on Sunday with thousands of runners dressed as Santa Claus.

The runners took part in an annual charity run called the Santa Dash.

The run in this Scottish city was not limited to humans, with many dogs taking part in the race.

"Our school are running for 'Give a Dog a Bone" charity, which is a charity that helps older people are over sixty that are lonely with a companion dog. So, the dogs are running it as well at the back," said Heather Lang a teacher at Hutchesons' Grammar School in Glasgow.

The event is organised by the Glasgow City Council, to raise money for charities.

According to the council the Santa Dash has raised over $450,000 for various charities since it started in 2006.