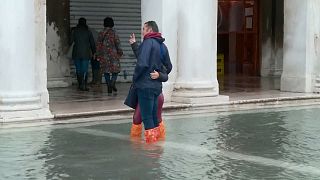 Venice flooded by third record-setting high tide in one week

Venice faced a new high tide on Sunday (November 17), days after the lagoon city suffered the worst flooding in more than 50 years.

The historic St. Marks Square has been submerged since Tuesday (November 12), but it still attracts tourists who are forced to wear high boots to walk in the water.

The mayor of Venice declared a state of emergency on Wednesday (November 13) after "apocalyptic" floods swept through the city of the lagoon, flooding its historic basilica and flooding centenary squares and buildings.

Venice’s Tide Office said the peak tide of 1.5 meters (nearly 5 feet) hit just after 13:00 CET. It marked third time since Tuesday night’s 1.87-meter flood —the worst in 53 years — that water levels in Venice had topped 1.5 meters. Since records began in 1872, that level had never been reached even twice in one year, let alone three times in one week.