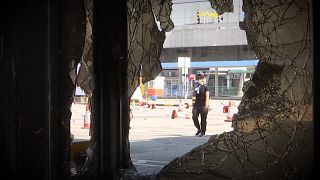 The Hong Kong Polytechnic University in Kowloon remained blocked by an unconditional group of at least 100 students and other militant protesters on Saturday, while most of the remaining nine major universities in the city were no longer occupied, except for a handful of people.

Students have been sleeping in tents and surviving on supplies donated by protesters and supporters, and have promised to maintain control of the campus until the government accepts demands ranging from the resignation of the executive director of the city-state to greater democracy.

After a police siege at universities for almost a week and the increase in violence between protesters and security agents, a student said he was afraid of abandoning his friends.

The campus is adjacent to an important underwater road tunnel to Hong Kong Island that has been closed for days after protesters set fire to tollbooths.

Universities have become the focus of last week's protests and the main battleground between pro-democratic activists and the police.

Many universities have cancelled classes for the rest of the year and hundreds of foreign students, and from mainland China, left or left Hong Kong.