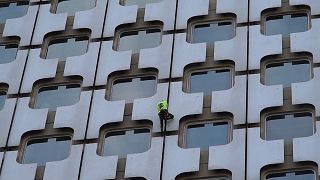 He was greeted by French police upon his return to the ground.

The 57-year-old made his way up the 152-metre Ariane Tower, despite police standing guard below, warning him that his pursuit was dangerous.

Following his ascent Robert said he "had a problem at the top" of the building where the structure becomes more complicated.

Robert has been arrested over 120 times for his illegal ascents.