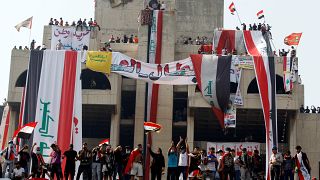 Thousands of Iraqis defied a curfew by demonstrating in Baghdad's Tahrir Square.

The crowd consisted mostly of young men, many draped in Iraqi flags. Surrounding streets brimmed with cars, taxis, motorcycles and tuk-tuks as more people made their way in. One protester demanded to have a "presidential regime" in the country, saying: "When a new president comes to power, he only rules us for four years, and then we can fire him."

The latest protest in Baghdad took place after a night of violence on October 28 in the holy city of Kerbala, where, according to medical and security sources, Iraqi security forces opened fire on protesters and killed at least 18 people.

Mass protests driven by discontent over economic hardship and corruption have broken nearly two years of relative stability in Iraq. At least 250 people have been killed since the unrest started on October 1.

Protesters in Baghdad could be seen carrying the coffin of a fellow protester who was killed in Tahrir square during the ongoing demonstrations.

Despite its vast oil wealth, Iraq suffers from high unemployment and a crumbling infrastructure, with frequent power outages that force many to rely on private generators.