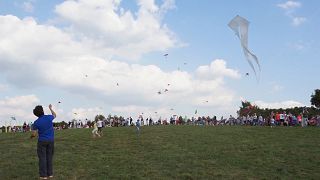 Kite festival fun in Russia despite lack of strong winds

Lack of strong winds grounded the mega kites at a festival in Russia.

But that didn't stop the participants having fun while showing off their kite flying skills.

A beached whale a sign that all was not going to be plain sailing at this kite festival.

Instead, dozens of smaller kites were able to take to the air.

It's the 17th year that this event, "The Variegated Sky", has taken place in Moscow's Tsaritsyno park.

Kiting was neglected in Russia for years and this festival was one of the first organised events aimed at enthusiasts.

Birds, cartoon characters and colourful creatures dive up and down in the sky despite the lack of strong winds.