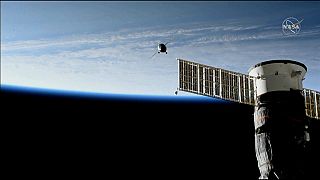 That docking attempt was aborted due to a suspected glitch linked to an automated control system on board the space station.