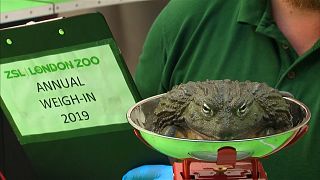 Bullfrogs, meerkats and penguins were among the animals to hit the scales at London Zoo for their annual weigh-in.

Zookeepers aren't keeping tabs on creatures' overindulgence: the weigh-in is a chance to find out about pregnancies when animals are about to moult, their health and help to administer medicines according to their weight, assistant curator in the mammals' department Teague Stubbington said.

Not every one of the zoo's over 19,000 animals - representing more than 560 species - will be weighed. Sometimes just one in a colony or group will be measured.

It will take a week to complete the annual weigh-in of animals including the Asiatic Lions, South African Porcupine and South American Coatis that call the Zoological Society Of London (ZSL) home.

In a statement, ZSL said the information collated is shared with zoos around the world using the Zoological Information Management System (ZIMS).