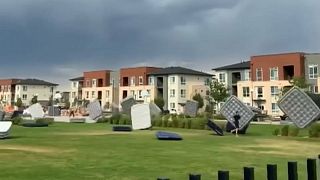 Strong winds blow dozens of air mattresses through US park

Dozens of air mattresses cartwheeled their way across a park in the US city of Denver after strong winds whipped through the neighbourhood.

Eyewitness Robb Manes, who filmed the bizarre spectacle, described the incident as the "great mattress migration of 2019".

Manes told local media he was at the public pool when the wind kicked in and the mattresses started to roll across the lawn.

According to local reports, the mattresses had been set out for an event called 'The Bed Cinema' later that day, where cinemagoers could reserve an air mattress to watch the film in the open air.