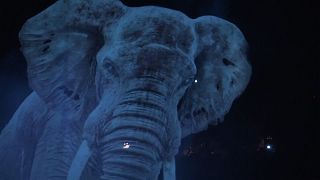 Germany is playing host to the world's first hologram circus

Horses, elephants and even giant goldfish are getting a breather at a circus in Germany after it began trialling holograms.

The digital trickery on display at Roncalli circus in Lübeck is intended as a stand-in for the real-life animals.

It's the world's first hologram circus, and the people behind it say the technology that projects the images onto a mesh wall around the ring is getting better every day.

There are projections of horses - which were originally included in circuses as a form of training for military service - and of elephants, which were traditionally drafted in to help haul equipment.

"In 2018, it was 250 years anniversary of the classical circus. So we wanted to keep it, and to show how the traditions have moved on," explains Markus Strobl, the circus's Head of Media, Digital and Communications.