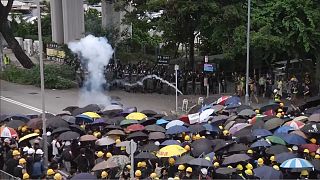 Officers in riot gear shot the tear gas Saturday into a crowd of demonstrators who were standing their ground despite appeals from the police to end the unsanctioned procession.

The protesters gathered in Yuen Long in a show of defiance against the white-clad assailants who beat dozens of people last Sunday night.

Massive demonstrations began in Hong Kong early last month against an extradition bill that would have allowed suspects to face trial in mainland China, where critics say their rights would be compromised.