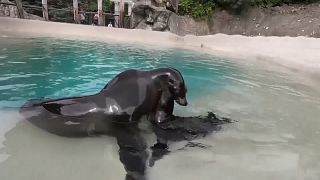 A California sea lion pup has made its public debut at Brookfield Zoo in Illinois.

The male pup named Charger was born on June 10 to a nine-year-old sea lion named Josephine. The two were given access to their outdoor habitat on Thursday for the first time since Charger's birth.

Charger has nearly doubled in weight since his birth and is up to about 40 pounds, thanks to his mother's milk. He'll be introduced to a diet of fish within the next month.

The Chicago Zoological Society says the pup will still have access to the indoor area as it gets acclimated to its new surroundings.

Brookfield Zoo is located about 10 miles west of downtown Chicago.