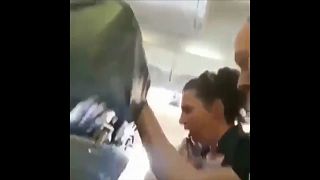 A passenger on a flight from Pristina in Kosovo to Switzerland has captured the moment a plane hit a severe pocket of turbulence.

Ten people were injured in the incident aboard the ALK Airlines flight including a flight attendant who was thrown into the ceiling.

Terrified passengers can be heard shouting in the video with some praying and others crying.

The incident happened about 20 minutes before the plane was due to land.

Emergency personnel were waiting on the tarmac and helped the passengers upon their landing, according to a spokesman of EuroAirport in Basel, Switzerland