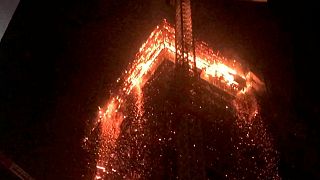 Fire breaks out at high-rise building in Warsaw

A fire broke out on the upper floors of an under-construction building in the Polish capital Warsaw on Friday (June 7) night.

More than 130 firefighters tackled the blaze, which was extinguished around dawn on Saturday.

The fire began around the 100-metre mark of the 120-metre building.