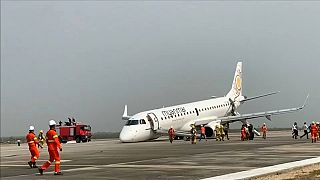 A Myanmar National Airlines flight landed safely at Mandalay airport on Sunday after landing gear problems forced it to touch down without the use of its front wheel.

The airline said in a statement on their Facebook page that flight UB103 came from Yangon and the pilot flew around the air traffic control tower twice in order for staff to check if the landing gear had been activated before the decision was made to make an emergency landing. The statement also said the pilot followed emergency procedures and dumped extra fuel before attempting to land.

Videos shared with Reuters showed smoke rising from under the seats of the aircraft shortly after landing. Passengers scrambled to evacuate as instructions were given over the speaker system.

Emergency services were seen attending to the Embraer 190 XYAGQ aircraft with its nose on the tarmac. Local media said no injuries were reported on the flight carrying 82 passengers and seven crew members.