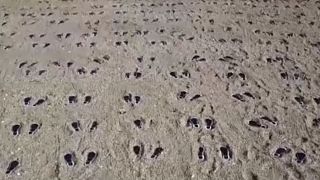 A poignant art installation of D-Day boot prints on the shores of Slapton Sands in south west England marked on Sunday the 75th anniversary of the Exercise Tiger tragedy of World War II, in which 749 US soldiers and sailors were killed.

Exercise Tiger was the code name for one in a series of large-scale rehearsals for the D-Day invasion of Normandy.

Artist Martin Barraud from the 'There But Not There' charity created the installation which will raise money for veteran employment projects.