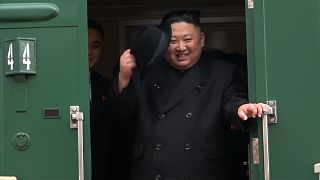 The North Korean leader, Kim Jong Un, arrived in Russia on Wednesday in an armoured train to seek the support of President Putin, while talks with Washington remain frozen.

In his first meeting with the Russian leader, Kim is expected to seek help to alleviate the economic pressure caused by US and international sanctions. The meeting will be held on Thursday in the port of Vladivostok, in the Russian Pacific.

Upon arriving at the Russian border station of Khasan, Kim was greeted with traditional flowers and gifts of bread and salt. He then toured the Russian-Korean Friendship House located at the station, built before a visit in 1986 by his late grandfather and founder and state leader, Kim Il Sung, who died in 1994.