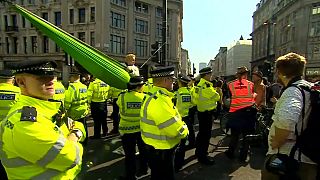 Organisers of 'Extinction Rebellion' have called for non-violent civil disobedience to force the British government to reduce net greenhouse gas emissions to zero by 2025 and stop what they call a global climate crisis.

Activists had been told they must confine any demonstrations to the Marble Arch area, and police were taking action against protesters in other locations.

London's Metropolitan Police said on Friday (April 19) that more than 600 arrests had been made relating to the protest.