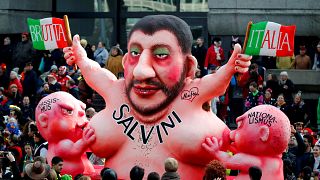 Myanmar displayed confiscated elephant ivory and other animal parts before destroying it in a ceremony to commemorate World Wildlife Day (WWD) at the Yangon Zoological Gardens on Sunday.

WWD is meant to raise awareness about the world's fauna and flora.

Not far from Yangon, people in New Delhi, India, called for peace with Pakistan on Monday, by forming a human chain amidst the rising tensions between the two nuclear-powered neighbours over Kashmir.

Back in Europe, revellers celebrated Rose Monday in Dusseldorf, Germany. Floats featuring many world leaders paraded in the crowded streets of the German city. Carnival season often offers an opportunity to laugh about pressing world issues. This year, the floats cartooned some of the usual suspects such as Trump, Putin, and Brexit.

Further west, a delightful video shows how Spanish farmer Pablo Pato transforms into a super freestyle roller skater after sweeping the hay off the floor of his barn in the mountain village of Llanuces in northern Spain.