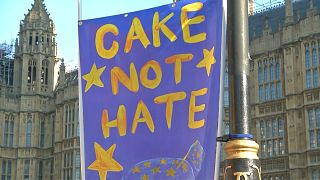 Pro and anti-Brexit protesters gathered outside the Houses of Parliament in London on Thursday as lawmakers debated Prime Minister Theresa May's Brexit strategy.

Valentine's Day was another crunch day for May as MPs gathered to vote on a motion she tabled seeking support for her Brexit strategy.

But MPs showed her little love and rejected her motion. The government did however survive two votes on amendments including one that would have forced it to start negotiations with the EU to delay Article 50 by at least three months.

The votes showed, once again, that British MPs are highly divided about the best course of action to take with just a little over 40 days to go before the country leaves the EU