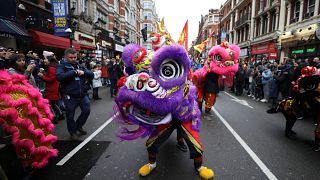 London celebrated Chinese New Year on Sunday, with crowds gathering in Trafalgar Square and lining the streets to watch a parade wind its way to Chinatown.

In Italy and Spain, a variety of festive, cultural activities were organised on Sunday to celebrate the Lunar New Year, which is the most important holiday for Chinese people.

A lion and dragon dance parade took centre stage on Sunday afternoon in Milan, attracting a large number of spectators.

The event was attended by Giuseppe Sala, the mayor of Milan and Song Xuefeng, the consul general of China in Milan.