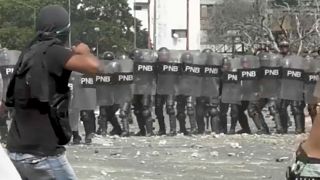 Venezuela unrest and Brussels climate protests: No Comment of the week

Venezuelan protesters clashed with police in Caracas on Wednesday, as the opposition sought to force President Nicolas Maduro from office amid global criticism of the leader.

Clashes also took place on Wednesday between protesters and police in Madrid. Taxi drivers in the Spanish capital have been on an open-ended strike since Monday to protest ride-hailing services such as Uber, which they say pose unfair competition

In one of Brussels' biggest ever student protests, tens of thousands of school children demonstrated against global warming and pollution. They have vowed to miss school once a week until the Belgian government takes action.