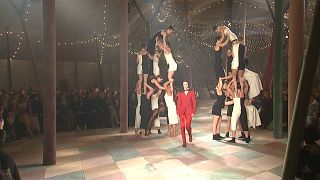 Glittering bonnets by milliner Stephen Jones and sparkling shoes added to the whimsical collection on the first day of Haute Couture Fashion Week, a celebration of high-end designers with one-of-a-kind outfits.

Actresses Felicity Jones and Rachel Brosnahan looked on from the front row, as the models wove their way through perilously-balanced human towers formed by the troupe of female acrobats.