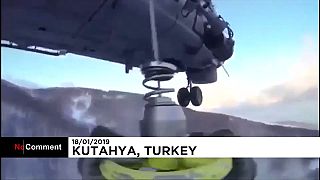 Turkish Air Force teams rescued four people stranded in a blizzard on a mountain in Western Turkey on Friday, according to to the Turkish Defence Ministry said in a statement.

It released video of the incident, which showed stranded people being rescued by helicopter amid heavy snowfall.

Snowploughs attempted to clear roads amid heavy snowfall that blanketed the whole village.