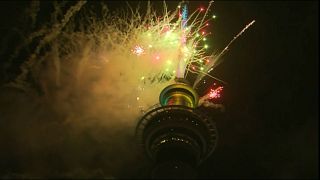 Fireworks lit up the skies over Auckland as New Zealand became one of the first countries to welcome the New Year on Tuesday. As the clock struck midnight, colourful fireworks burst from the top of the Auckland's Sky Tower. The display was accompanied for the first time by a complimentary light show on Auckland Harbour Bridge.

Thousands of Dutch revellers braved cold water and chilling winds on Tuesday to take a New Year's Day plunge in the North Sea, a tradition thought to date back to the 1960s.

Pope Francis impressed everyone on Wednesday with his basketball skills, helped by a group of Cuban circus performers who joined him at his weekly general audience at the Vatican.

An experienced paraglider had a shocking encounter with a dust devil while preparing for a flight in Manilla, New South Wales, Australia on January 2. The man, who was visiting from overseas, was one of 40 paragliding pilots setting up to take off on a cross-country flight from a popular launch spot on Mount Borah in the northwest.

A dust devil rapidly formed and raced across the launch area, catching the paraglider and flinging him into the air. In the above video, filmed by the man’s wife, the paraglider can be seen swirling around for a few seconds before being ejected out to the side of the fast-rotating dust devil.